While I was on my 2-week stay-cation last September, and on one of the area’s Heritage Open Days, I visited St. Augustine’s Church in Pendlebury, eight miles from home and an easy 20-minute drive heading towards Manchester. I’d never been there before but it had come to my attention the previous day and it sounded interesting so off I went.

Known locally as the ‘Miners’ Cathedral’ because of its vast cathedral-like proportions and its location in the heart of a one-time coal mining community St. Augustine’s came into being thanks to the generosity of one man, Edward Stanley Heywood, one of the family of Heywood Brothers who were influential Manchester bankers. Situated about five miles from the centre of Manchester the church was designed in 1870 by architect George Frederick Bodley (1827-1907) assisted by Thomas Garner, and construction started in 1871 with the foundation stone being laid in September that year. The completed building was consecrated in May 1874 and the total cost including decoration and furnishings was borne by Heywood himself. The church’s first vicar was Heywood’s brother-in-law Dr. Alfred Dewes who devoted his life to St. Augustine’s and remained there until his death in 1911.

George Frederick Bodley served as an apprentice architect for five years then at the age of 23 set up his own practice in 1850, eventually setting up a partnership with Thomas Garner in 1869, and it was during the later years of the 19th century that some of his finest churches were built. In designing St. Augustine’s Bodley had also designed a bell tower which was to be a free-standing structure linked to the church on the south side and standing higher than the main roof, but the ambitious project to build a church of cathedral proportions was extremely expensive and as Heywood considered the bell tower wasn’t essential the plan was abandoned and the money was used to provide a vicarage, school and gatehouse. The church itself was built of red brick, with a clay tiled roof and dressed stone for the windows and doorways, and the building’s dimensions measured 160ft long from east to west, 50ft wide and 80ft 2ins high at the ridge of the roof.

Above the main west doorway three niches contain the statues of St. Augustine flanked by the Angel Gabriel on the left and the Blessed Virgin Mary on the right, and high in the wall below the apex of the roof is a recess housing the single church bell. Above the porch doorway on the south west corner, which was originally the main entrance, are another three niches housing statues, with the centre one being Our Lord with his hand raised to bless those entering the church, and at each side are the carved 1874 date stones. 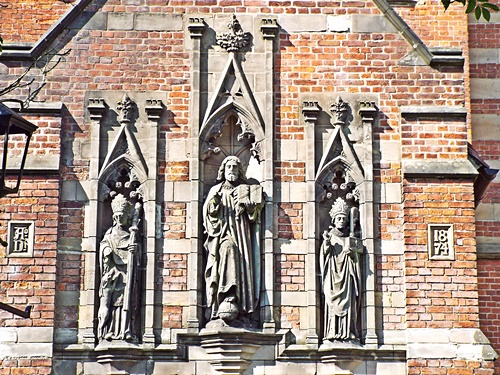 Below the window in the east wall is a memorial showing the Risen Christ and commemorating the 178 men and boys, the youngest only 13 years old, who lost their lives in a devastating underground explosion at the Clifton Hall Colliery on June 18th 1885; the bodies of the victims were buried in the grounds of several local churches with 64 of them being interred at St. Augustine’s. The churchyard also contains the war graves of twelve service personnel from WW1 and four from WW2 and is a favourite spot for tortoiseshell butterflies who continue to make the grounds their home.

Before opening for public worship it was Bodley’s express wish that St. Augustine’s was provided with chairs for the congregation rather than pews. This was not only from an appearance point of view but also to prevent the system of paid pew rents whereby the wealthy could have exclusive use of a particular pew for themselves, their family and friends. This system in other churches had often discouraged the poor from attending services as they could find themselves having to either stand up or sit on cold bare floors; there are seven rows of pews towards the front of the nave but these were later additions. 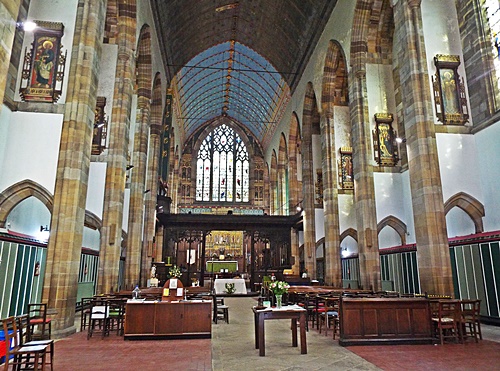 At the north west corner of the nave is the octagonal font, standing two steps above floor level. Each of its eight sides has an arched recess containing a shield, with four of the shields bearing the IHS monogram while the others have roses and fleur-de-lys. The font cover is a finely crafted piece of woodcarving and has a traceried lower section with three tiers above and an angel at the top. 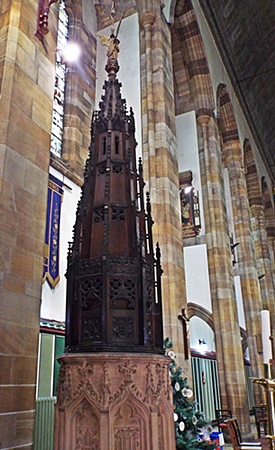 High up on eight of the internal buttresses in the nave are a series of elaborately carved and gilded frames containing paintings depicting several saints, and of these eight the front two on each side of the nave have been restored. The four on the north wall are saints Paul, Peter, Gregory and Augustine while those on the south wall are the Venerable Bede and saints Ambrose, Jerome and Augustine of Hippo; unfortunately bright sunlight shining on the paintings of Gregory and Augustine made them difficult to photograph successfully so I only got six out of the eight.

The square pulpit is carved in the 16th century style with ‘linen fold’ panelling on the three sides. A later addition was a shell-shaped ‘sounding board’ suspended above it from an iron bracket, this was to project the speaker’s voice into the nave; in 1929 it was described by a writer (unknown) as “an American contraption – very effective but also very ugly”. Church records show that it was installed during Bodley’s lifetime and it was known that its appearance reduced him to tears; fast forward to 1996 and it was removed after extensive consultations with everyone concerned. 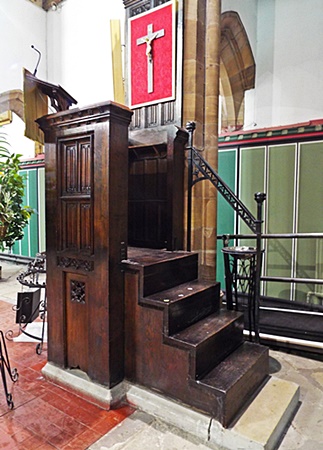 Spaced at intervals along the walls of the nave and continuing into the north and south choir isles are a series of carved wooden plaques, possibly later additions, telling the story of the Crucifiction; I photographed them all but there were far too many to include them all on here so I’ve selected just two. 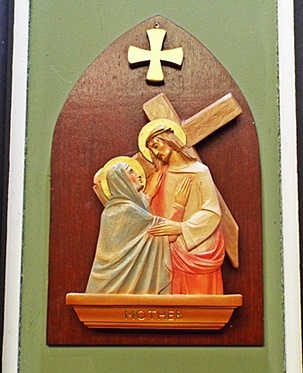 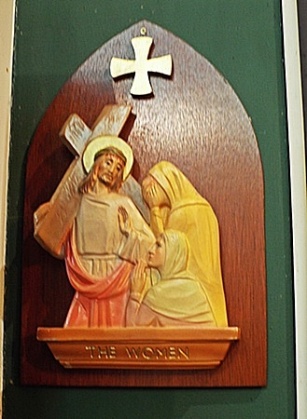 Dividing the nave from the chancel is the oak rood screen, an elaborately carved design of Bodley’s with a wide central arch and six open sections with delicate tracery, surmounted by the base of the (incomplete) rood loft forming a deep canopy to the screen itself. Just in front and above the screen on the north side of the nave is the organ loft with its richly coloured and gilded organ case, again designed and crafted by Bodley; the organ itself was originally built by Brindley & Foster of Sheffield, later rebuilt with pneumatic action by Ernest Wadsworth & Co of Manchester then rebuilt with a detached console in the mid 1990s.

The doorway to the organ loft is on the opposite side of the nave to the organ and the door itself has large hinges depicting leaves and acorns, another example of Bodley’s meticulous attention to detail. Before the organ was rebuilt in the 1990s access to the console was gained by walking across the top of the rood screen, hazardous enough but made worse with the installation of a bank of heating pipes covering most of the canopy top. Although very effective in combating the cold down-draught they also prevented the use of the safety handrail, making the journey to the console doubly perilous, although a certain Dorothy Morris, St. Augustine’s organist for over 30 years, regularly made the hair-raising journey until she was well into her eighties. 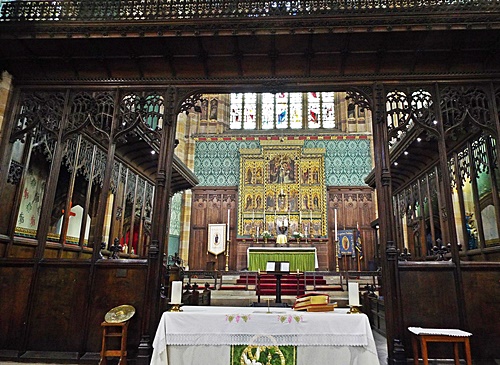 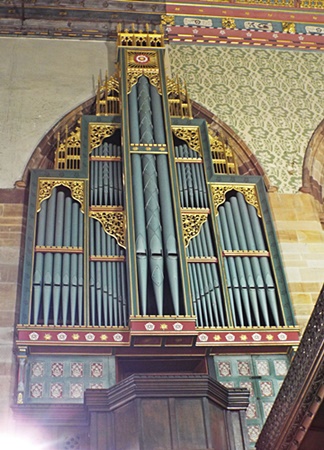 On both sides of the chancel the ends of the rear choir stalls incorporate ten carved creatures, five on each side, and include a cockerel, a dog, and several mythological beasts. In the north choir isle behind the stalls is a small shrine while in the south choir isle is a permanent Lady Chapel with its own altar and seating for eight people, both created in the mid 1990s. The richly painted chancel ceiling was restored and repainted in 1971 but some later damage to the external roof resulted in water ingress which caused the paint to peel in several places, which seemingly hasn’t so far been rectified. 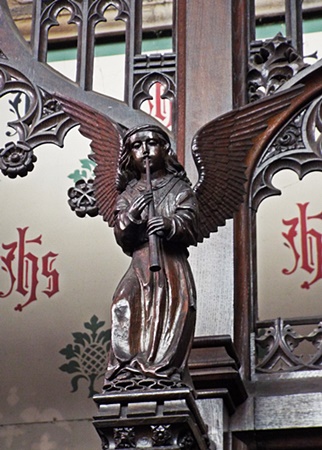 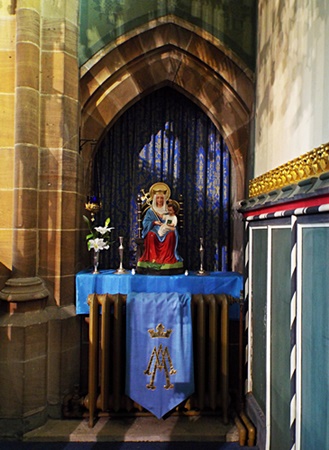 Bordered by gold vine leaf trail and completed with gilded cresting at the top the huge reredos fills the centre of the east wall while at each side the wall is lined with ‘linen fold’ oak panelling. The reredos itself is made up of 19 compartments containing a series of richly coloured paintings; each compartment has a traceried canopy and parts of some of the paintings are in relief. On the shelf at the bottom are six large candlesticks, four of which were dedicated in 1930; made in Milan they are copies of some 300-year old candlesticks situated where St. Peter’s Chair stands in Rome. 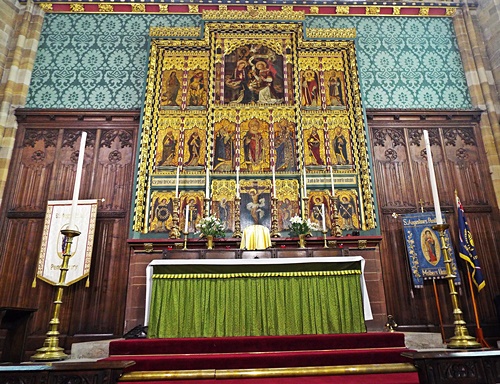 The design of the windows was closely supervised by Bodley, with the stained glass being done by Burlison & Grylls, a partnership set up in 1868 with the encouragement of Bodley himself and Thomas Garner. By the 1890s Burlison & Grylls was one of the most highly regarded stained glass firms in the country; thousands of their windows appeared in churches throughout Britain, with their most spectacular being the large rose window installed in 1902 in Poet’s Corner at Westminster Abbey.

Bodley’s opinion was that much of the stained glass of his period was spoiled by having too great a variety of colours so for St. Augustine’s he chose colour schemes to provide each window with just one dominant colour. The windows themselves are set high in the church walls, with their bases some 16 feet above floor level, and being so high it was impossible to get good clear shots of them; apparently the only way to fully appreciate the detail in each window is through binoculars.

Tucked in the south west corner of the nave and near the south porch door is a very small single window depicting the entrance of St. Augustine into Canterbury, and with the addition of a votive candle stand in 1996 this corner has become the Shrine of St. Augustine. Most of Bodley’s original furnishings and adornments remain largely unchanged and any alterations or additions which have been made over the years are very few. 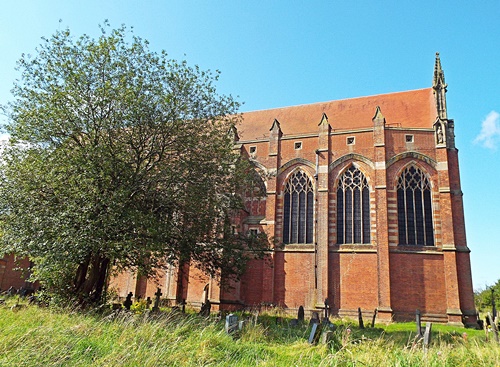 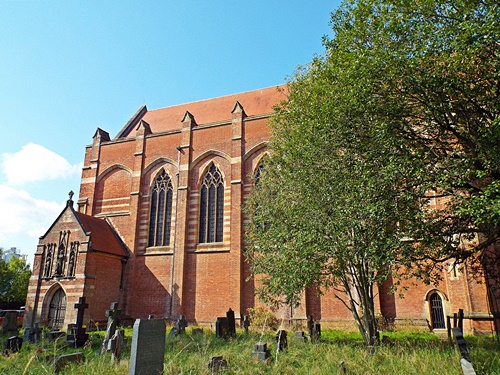 George Frederick Bodley was a remarkable man. Architect, poet, musician and deeply religious he was remembered for his courtesy, his gentle personality and his amazing memory for detail – many years after visiting other churches he could still sit down and accurately draw detailed sketches of them. Pendlebury has changed greatly since 1874 and its generations have changed with it but St. Augustine’s remains in regular use, still standing at the heart of the community and a testament to the most accomplished and refined architect who designed and created it.

Follow Life In The Mouse House on WordPress.com
Join 339 other followers